Welcome to the 28th running of the TRIATHLON RELAYS at the National Water Sports Centre, Holme Pierrepont, Nottingham. The National Water Sports Centre is situated two miles south of the city of Nottingham. We are proud to host the 2019 Triathlon England Club Relay Championships with the racing taking place on a completely closed road course which is near perfect for both competitors and spectators alike.

Originally started in 1991, this weekend has become legendary in as much as although others have tried to replicate it, the Triathlon Relays is still very unique. In 2018 over 2000 athletes and over 100 different clubs joined in the fun that we call 'organised chaos'.

* A £5 per team administration fee will be charged by our online entry partner, Results Base.

If you are unsure which category your team fits into, just click this diagram to get all the answers! 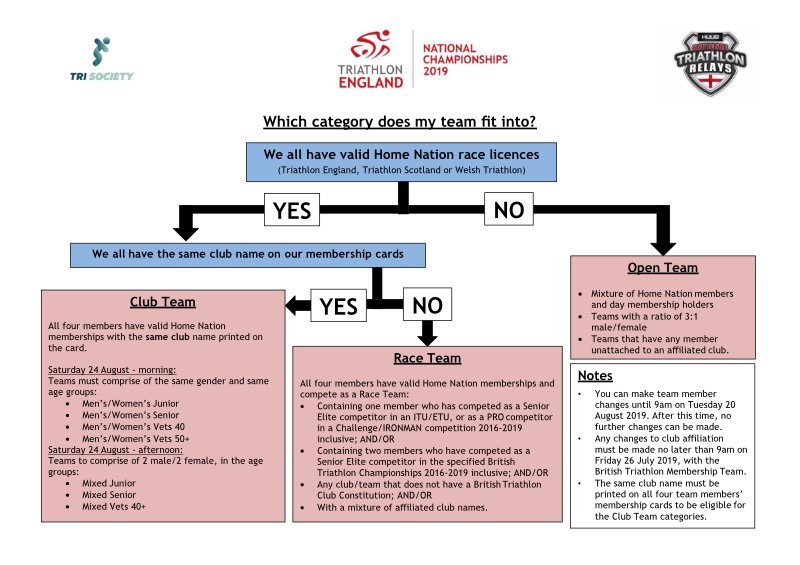 The move away from the title 'Club Relays' is simple, we spotted that less than 40% of athletes in our regular individual events were members of clubs... we wanted the weekend to be enjoyed by those athletes that were not members of clubs, but ultimately had three friends and wanted to join in the fun. We have also been working alongside British Triathlon Federation & Triathlon England to simply the rules - they are now very simple.

In the morning, the men's and women's categories will be racing in various categories for National Championship Awards - junior, senior, vet 40 and vet 50.

In the afternoon, the mixed category will give the chance for the men's and women's teams to combine and race for more National Championship Awards.

To see a summary of the National Championships Awards follow the link.

In case of questions about the event please contact TriSociety: